Looking into the Daily Use of Hakka 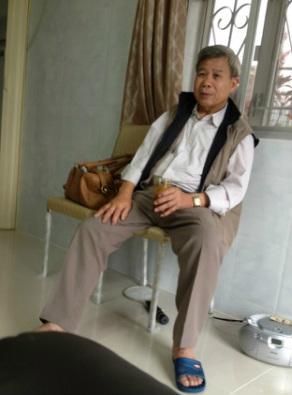 Three of the interviewees all pointed out that the use of Hakka is highly related to WHOM you speak with, strongly associated between the generation. “Of course I will use Hakka to talk with my father and uncles, to the elderly generally speaking, but always Cantonese to my brothers”, Apple said. Fat and Yau agreed that they would use Cantonese in talking with the younger generation. They think the young are more “civilized”, being connected closely with the urban city that using Cantonese is more appropriate than using Hakka.

Our groupmate, Vanessa, observed the same phenomenon during the daily interaction between the Hakka and herself. “My Grandpa and uncles use Hakka in talking with my Mum, however they will immediately shift to Cantonese while talking with me. It is so interesting that when my Mum and I are situated in the same circumstance, they will still shift among Hakka and Cantonese at the same time”.

It proves that speak to WHOM is one of the important factor in the language varieties. Since language varieties are full of indexicality, it is meaningful in pointing out the speaker’s origin and social identity. Speaking Hakka, which means CONVERGENCE is carried out, as to reduce the social distance built between one another. On the contrary, distinctiveness is emphasized by using Cantonese. As Hakka is still holding traditional Chinese culture, placing the male in superior to the female, Vanessa is categorized as “outsider” who is with greater social distance. The use of language here clearly pointed out the representation of identity shaping.